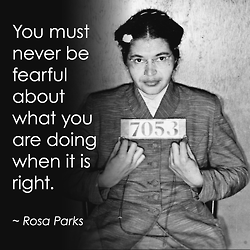 On 1st December 1955, after a hard day of work, a black woman took the bus home. Her name was Rosa Parks, and she lived in Montgomery, Alabama. The bus driver stopped and asked her to give her seat for a white passenger. Rosa Parks refused. The driver called the police and she was arrested.

The police arrested her because that time there were Apartheid laws (https://www.google.it/search?q=apartheid+laws&rlz=1C1RNKA_itIT573IT573&espv=2&tbm=isch&tbo=u&source=univ&sa=X&ei=0budU-HlNumm4gSnxoHgCA&ved=0CDwQsAQ&biw=1024&bih=610) which segregated black people from white people. These laws existed in many southern States. Black Americans couldn’t go to school and went to separate hospitals.

Even on buses black people had different seats. That time people were not used to travel by means of transport like buses or cars, so when they travelled they usually felt sick. If they sat at the front on buses people felt better than travelling at the back. This was why front seats were the favorite and they were for white people, whereas black people could only sit on back seats.

Black people couldn’t get into restaurants, or, if they could, they had separate areas where to sit and eat.

Black people couldn’t get good jobs or houses, and in these areas many African-Americans couldn’t vote. They were also often attacked by white people.

Rosa and most African-Americans were tired of the discrimination. After the arrest, as a protest, local African-Americans stopped travelling by bus for 382 days and newspapers around the world spoke about it. In the end the Supreme Court decided that racial segregation on public transport was illegal.

The success of the boycott made them understand that they had the power to change their situation.

One of the leaders of the movement was Martin Luther King. He led the African-Americans in a long fight for equality.

Unfortunately, King was assassinated in 1968 on  a balcony in  Memphis Tennessee (https://en.wikipedia.org/wiki/Memphis,_Tennessee).

Only fifty years after Rosa Parks’ protest, in January 2009, Barak Obama became the first African-American President of the United States. It was a historic moment.

The United States, and the world, have become very different places since Rosa Parks’ protest.

Rosa Parks died on 24th October 2005. She was 92 years old. She inspired a lot of people, and many people call her “The Mother of Civil Rights Movement”.